Stelgidopteryx serripennis
Passeriformes
Members of this diverse group make up more than half of the bird species worldwide. Most are small. However their brains are relatively large and their learning abilities are greater than those of most other birds. Passerine birds are divided into two suborders, the suboscines and the oscines. Oscines are capable of more complex song, and are considered the true songbirds. In Washington, the tyrant flycatchers are the only suboscines; the remaining 27 families are oscines.
Hirundinidae
Swallows are small, graceful birds with long, pointed wings, tiny bills, and small feet. They eat flying insects and forage over open water or ground. Many are well adapted to living near humans and use man-made structures for nesting. Swallows make their nests out of mud attached to a structure, or build in sandy burrows or in available cavities. Most swallows are social, foraging and migrating in flocks; many nest colonially, but a few are solitary. Most are monogamous, although extra-pair copulations are common in many species. The males of some species help incubate the eggs while others do not. Both parents provide care for the young. All North American species migrate.
Fairly common summer resident.
Source of Bird Audio

Northern Rough-winged Swallows are usually found at lower elevations near water, especially along sandy, coastal cliffs or rivers with high, sandy banks and nearby open areas. They also nest in man-made banks. They are the principal bank-nesting swallow in western Washington. In eastern Washington, their habitat overlaps almost completely with Bank Swallows, although Bank Swallows are more restricted to the Columbia Basin.

Northern Rough-winged Swallows usually nest in small colonies of a few pairs, occasionally as isolated pairs. Where their range overlaps with that of Bank Swallows, they can often be found on the outskirts of Bank Swallow colonies. They usually nest in burrows in sandy, vertical banks. They may dig their own burrows, from one to six feet long, or use burrows dug by Bank Swallows, kingfishers, or ground squirrels. Sometimes they nest in pipes, crevices, or holes in buildings. Their bulky nests are made of twigs, weeds, and fibers of bark, lined with grass and sometimes horse manure. The female incubates five to seven eggs for 12 to 16 days. Both parents feed the young, which leave the nest after 19 to 20 days. The parents continue to feed the young for a few days after they leave the nest.

Medium-distance migrants, Northern Rough-winged Swallows typically migrate in flocks of mixed swallow species to Mexico and Central America. They arrive in Washington in April and leave in the late summer, soon after the young fledge. Because both fall and spring migrations extend over many weeks, large concentrations of migrants are unusual.

According to the Breeding Bird Survey, the population of Northern Rough-winged Swallows has declined in Washington since 1966 (although the decline is not statistically significant). However, since Northern Rough-winged Swallows are patchily distributed, they might not be accurately counted by the methods employed by the Breeding Bird Survey. River flooding and cattle grazing, both of which cause stream erosion, have exposed many sandy banks suitable for nesting, and increased development in Washington has created more artificial nest sites as well. As the populations of most cavity-nesting species tend to be limited by the availability of cavities, the abundance of potential nest sites should bode well for the Northern Rough-winged Swallow.

Northern Rough-winged Swallows are common from mid-April through August at lower elevations throughout Washington were there is appropriate nesting habitat nearby, especially around farms and the floodplains of major rivers. 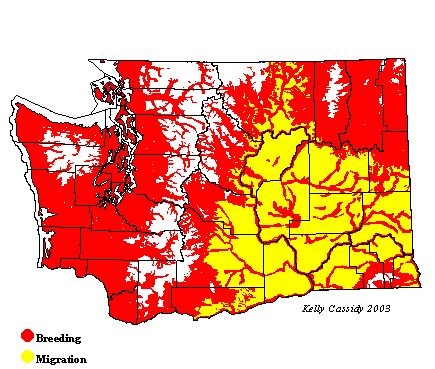