Spizella arborea
Passeriformes
Members of this diverse group make up more than half of the bird species worldwide. Most are small. However their brains are relatively large and their learning abilities are greater than those of most other birds. Passerine birds are divided into two suborders, the suboscines and the oscines. Oscines are capable of more complex song, and are considered the true songbirds. In Washington, the tyrant flycatchers are the only suboscines; the remaining 27 families are oscines.
Emberizidae
The Emberizidae family is made up of the New World sparrows, longspurs, and some of the buntings. Most forage and nest on the ground. Most emberizids are seedeaters and have short, thick bills adapted for this diet, although they all eat insects and other arthropods at times, and feed them to their young. They are typically monogamous. Females generally build the nests and incubate the eggs and young, but both parents feed the young. Clutches are small, generally three to five eggs. Many of these birds are small, brown, and streaked, and stay close to cover, making identification challenging.
Uncommon winter resident.
Source of Bird Audio

The American Tree Sparrow is a small sparrow with a long notched tail. The adult has a streaked back and wings, with two white wing bars, but is otherwise unstreaked, while the juvenile is streaky overall. Adults have an unstreaked gray-brown breast and belly, with a dark spot in the center. The tail, rump, and nape of the neck are all solid gray. The upper mandible of the bill is dark and the lower is yellow. The head is mostly gray, with a rufous crown and eye-line.

The American Tree Sparrow is actually not closely associated with trees. Its breeding habitat is in the far north, in the shrubby tundra beyond the tree-line. In winter and during migration, they inhabit a variety of open habitats, including dry grassland, sagebrush desert, and farmland. They can also be found in woodlands bordering rivers, shrubby thickets and other weedy edges, and yards with birdfeeders.

Outside of the nesting season, Tree Sparrows are usually found foraging in flocks in low bushes or on the ground. In snowy fields, they will beat tall weeds with their wings and collect the fallen seeds from atop the snow.

Seeds, insects, and berries make up most of the American Tree Sparrow's diet. In winter, they eat primarily seeds and berries, while in summer their diet shifts to insects, especially when feeding young.

The male defends a territory, and the monogamous pair forms shortly after the birds arrive on the breeding grounds. The nest is an open cup of twigs, grass, and moss, often lined with ptarmigan feathers and other fine material. It is situated on the ground, on grass clumps or hummocks in the open tundra. The female incubates the 4-6 eggs for 12-13 days. Both parents feed the young who leave the nest after 8-10 days and can fly at two weeks of age. The parents continue to feed the young for about two weeks after they leave the nest.

American Tree Sparrows are complete migrants, meaning there is no overlap between breeding and wintering range. Migration is late in the fall and early in the spring, with the birds spending the breeding season in the far north.

Most of the American Tree Sparrow's nesting area is remote from human disturbance and well protected, although large-scale development in the far north may threaten this species. On the wintering grounds, residential gardening practices such as clearing underbrush, removing weeds, and cutting grass reduce the food supply, but feeding stations often make up for this and American Tree Sparrows have adapted well to living in suburban environments and are currently considered abundant. 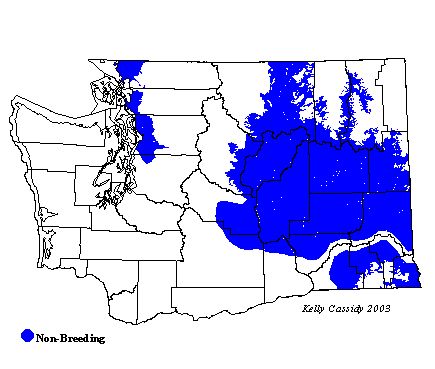