Empidonax difficilis
Passeriformes
Members of this diverse group make up more than half of the bird species worldwide. Most are small. However their brains are relatively large and their learning abilities are greater than those of most other birds. Passerine birds are divided into two suborders, the suboscines and the oscines. Oscines are capable of more complex song, and are considered the true songbirds. In Washington, the tyrant flycatchers are the only suboscines; the remaining 27 families are oscines.
Tyrannidae
Unlike most passerines found in North America, flycatchers are suboscines. Suboscines have a simpler syrinx (voice box) than the oscines (songbirds), and hence have less-developed and less-elaborate songs. Their song is innate, and does not contain a learned component. The flycatchers are the only suboscine passerines found in North America north of Mexico. Nearly all suboscines (and all Tyrannidae) are native to the New World, and they are much more numerous in the tropics, where several other families occur in addition to the Tyrannidae. Flycatchers are named for their foraging style. They sit quietly on a perch and dart out to grab a flying insect from the air, and then return to their perch to wait for the next meal to fly by. Many also forage by hovering next to foliage or over the ground. Most have a distinct, upright posture and a slight crest. They have small feet as they do not typically walk or run on the ground. Most flycatchers are monogamous. The female generally builds the nest, incubates the eggs, and broods the young, although both parents feed the young. Flycatchers of the genus Empidonax pose many identification challenges for birders. Range, habitat, vocalizations, and behavior must all be taken into account to distinguish between members of this group.
Common summer west. Fairly common east.
Source of Bird Audio

The Pacific-slope Flycatcher is yellowish underneath, with the yellow extending up to the throat. It has a broad bill, and its lower mandible is yellow. The white eye-ring extends to the back in a teardrop shape. The juvenile has two buffy wing-bars that change to white as it matures. These features are distinctive, as is its voice, making separation from other Empidonax species in its range relatively easy.

The habitat of Pacific-slope Flycatchers includes both deciduous and mixed deciduous-coniferous forests. These birds are generally found in the sub-canopy of heavy, wet forest. Streamsides and shady areas with shrubby understory are often used. Along the outer coast, they are the only Empidonax flycatchers commonly found in the dense, wet rain forest of this region.

The Pacific-slope Flycatcher generally watches from a perch in the lower or middle canopy, and flies out to catch prey in the air. It also hovers in front of foliage or twigs and gleans prey from their surfaces. This species can be very hard to see, but can be found readily once its call is known--a distinct, upslurred suweet, or a high, thin tseep.

Pacific-slope Flycatchers usually select natural sites such as trees for nesting. Very occasionally they nest under man-made bridges or eaves. Nests usually have some sort of shelter from above. Natural nesting sites include tree stumps and upturned tree roots, which are typically closer to the ground than nests on man-made objects. The female builds the nest of moss, grass, rootlets, bark, and lichen, and lines it with hair and feathers. She usually incubates three to four eggs for 14 to 15 days. Both parents feed the young, which leave the nest at about 15 days. The young stay near the nest for a few days after fledging.

These medium-distance migrants arrive in Washington in late April or early May. Most birds leave in late July and early August; however, some stay into mid-September. They head to the lowlands of western and southern Mexico for the winter.

The Pacific-slope Flycatcher is listed on the Audubon~Washington watch list. The Breeding Bird Survey has recorded a significant decline in Washington from 1980-2000. While man-made structures may add potential nesting sites, logging and clearing underbrush degrades the habitat. 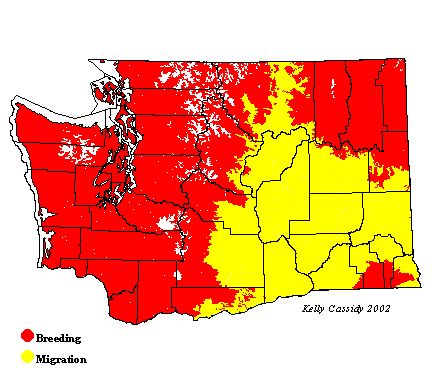