Corvus caurinus
Passeriformes
Members of this diverse group make up more than half of the bird species worldwide. Most are small. However their brains are relatively large and their learning abilities are greater than those of most other birds. Passerine birds are divided into two suborders, the suboscines and the oscines. Oscines are capable of more complex song, and are considered the true songbirds. In Washington, the tyrant flycatchers are the only suboscines; the remaining 27 families are oscines.
Corvidae
The crows, jays, and allies are intelligent and crafty birds. They are opportunistic, and most thrive living among humans. For this reason, many have been persecuted as pests. Many members of this family cache, or store, food for the winter, which allows them to be year-round residents at high altitudes and in northern climates. Many live in forests, and most nest in trees. Crows, ravens, magpies, and jays are generally long-lived and monogamous, and form long-term pair bonds. Some species have helpers at the nest. Their nests are typically bulky and made from sticks, and both sexes generally help build them. Females incubate the young, but there are exceptions where the male helps. Both sexes usually feed and care for the young. The corvids are omnivores, eating seeds, nuts, insects, carrion, and small vertebrates. They often rob the nests of other birds of eggs and nestlings. Most are social, forming flocks, especially outside the breeding season.

Northwestern Crows are large, shiny, black birds with long, solid bills. They can be distinguished from Common Ravens by their smaller size, straight or slightly rounded tails, and higher-pitched voices. Ravens also have more massive bills and longer, shaggier feathers at their throats. Northwestern Crows are smaller than the closely related American Crows and have lower, huskier voices. Many authorities believe that the Northwestern Crow is not a true species, but a subspecies of the American Crow.

Northwestern Crows are typically associated with tidal areas. They are generally found in semi-open habitats such as rocky beaches, forested shorelines, tidal estuaries, and coastal ponds, around seabird colonies and garbage dumps, and in towns, cities, and campgrounds. They often nest near intertidal flats.

Outside the breeding season, Northwestern Crows are quite sociable, roosting and foraging in large flocks. They are intelligent and opportunistic, and quickly take advantage of new sources of food. They generally feed on the ground or in shallow water. They drop hard-shelled items onto hard surfaces, such as rocks and roads, to break them open. Northwestern Crows foraging in intertidal areas often store extra food during low tide, when it is plentiful, and consume it during the following high tide, when the intertidal zone is under water.

Northwestern Crows are omnivores. Because they live in coastal areas, much of their diet is aquatic creatures, shellfish, fish, seabird eggs, and various aquatic invertebrates. They also eat carrion and garbage.

Northwestern Crows are monogamous and form long-term pair bonds. Sometimes one of the offspring from a previous year stays with the pair to help feed the nestlings. Both members of the pair help build the nest, which is a bulky, stick platform, lined with mud, moss, grass, rootlets, and cedar bark. The nest is usually in the canopy of a tree, but can also be in a shrub or on the ground. The female incubates 3-6 eggs (usually four) for 17-20 days. The female broods the young constantly for about four days, and then helps the male and helper bring food. The young start venturing out of the nest onto nearby branches at 26-33 days, and then begin to fledge about three days later (typically at 29-35 days). The young stay on the parents' territory for another couple of weeks, and are fed by the parents for a few weeks after leaving the territory.

Northwestern Crows are not considered to migrate.

Northwestern Crows can be found year round in coastal Washington and Puget Sound. 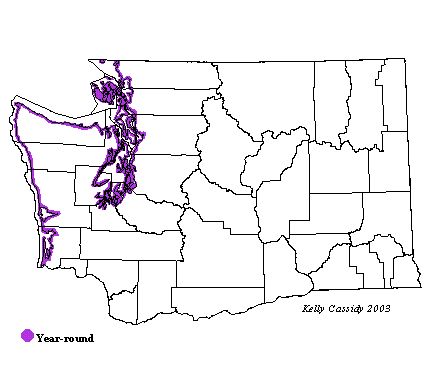